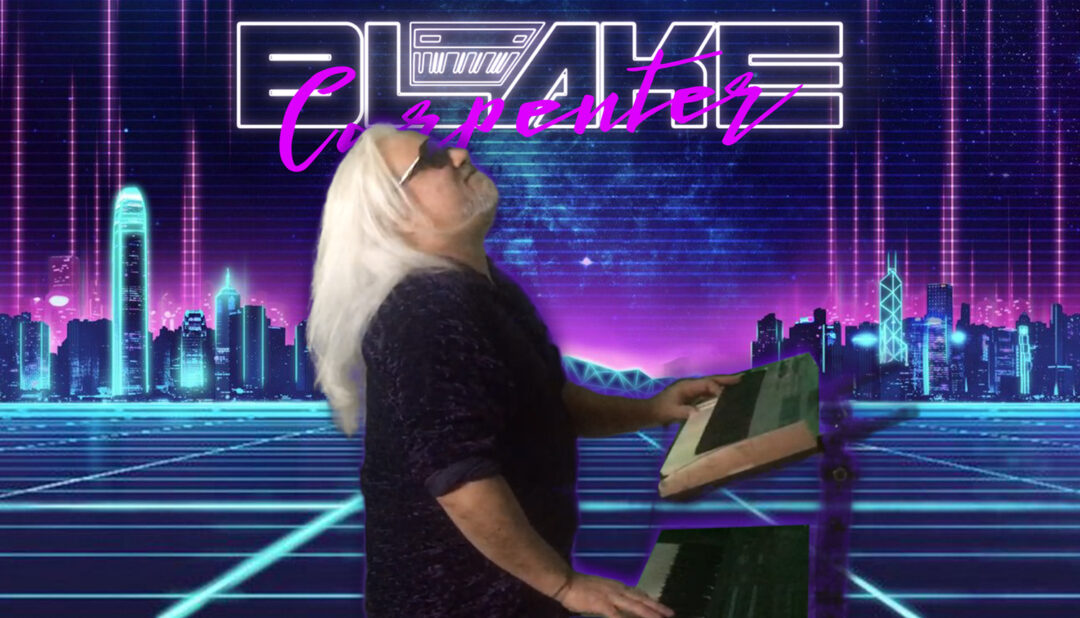 Originally from Rhode Island, a well-rounded singer/songwriter/musician with a multitude of influences ranging from classical to metal and spanning all genres in between. His favorite styles of music are those that showcase drive and talent. Writing in styles from folk to classic prog, hard rock/heavy metal to post-punk and new wave, Blake will take you on a journey beyond imagination.

Blake started singing at the age of 4 after hearing his first KISS album at a neighbors house. He proceeded to sing along to almost anything he heard, Elvis, Manilow, Earth, Wind, and Fire as well as KISS. He soon showed interest in the organ he had watched his mother play and started tapping out melodies and chords. At the age of 12, Blake picked up the guitar and really started to write his own songs with lyrics. For the next 8 years, Blake spent his time honing his writing skills and playing solo gigs at coffee shops and on the street corners of Providence, Rhode Island, and Boston, Massachusetts.

In 1991 Blake teamed up with David Mars for the short-lived project named Naked at Birth. Blake and David performed as an acoustic duo around New England featuring their original work. Working with producer Tony Lucci a Naked at Birth EP was recorded. Soon after this, the Naked at Birth project fizzled out. Blake was then approached by Tony Lucci and asked to try out as a lead singer for a ready-made project better suited to Blake’s style. He quickly took up this offer and in 1992 Electric Squid was formed. This was a hard-rocking act performing songs written by Blake and covers from artists like Primus and Pink Floyd. After a summer of playing venues around Rhode Island, Blake left Electric Squid to deal with personal issues.

By the summer of 1994, Blake was far away from the music scene. There had been no writing or playing music for almost 3 years. In late 1996 he started running karaoke at local night clubs and bars in Rhode Island and Massachusetts where he was able to further hone his vocal skills.

As Blake eased back into music he started writing again with the help of friends and their instruments. This is when the real writing began. Blake felt the new songs had real meaning and depth and achieved a new level of storytelling. He started to play solo gigs again in and around Providence. In 1998 he was introduced to Dana Snell, a guitar player from Massachusetts and the two started to record some of Blake’s new music. Unfortunately in 2000 Blake and Dana went separate ways and Blake was once again a solo act.

As Blake continued writing music and lyrics he searched for the right musicians to collaborate with. Blake found Kevin Williams who recorded some guitar solos on a project Blake was working on. A few months later Kevin contacted Blake with a project he was working on with Ron Pacheco and Brock Papinau. After a quick audition, the foursome started working on original pieces from Ron and Blake and also writing new music with input from all the members. Their music often highlighted the excellent guitar skills of Kevin and the crazy bass skills of Ron. Dubbing the band Ogma – The Celtic god of art and music– they played all around Rhode Island and Massachusetts on a weekly basis. This continued for 2 ½ years until the band members each sought their own path.

The Minstrel’s Ghost and Voice of the Enslaved:

In 2004 Blake moved to Tucson to escape the cold and snow of New England and relax in the Arizona sun. He brought with him his music but barely touched anything for about a year. After meeting Robert Lopez in the summer of 2005 his rocking roots were rekindled once again. He began recording what was to become The Road to Avalon with Robertsoloing on all tracks. Unfortunately, there were issues and The Road to Avalon was put on hold.

Blake quickly began writing new material and Dream Things True was born. A 12 song CD written, recorded and produced by Blake under the name The Minstrel’s Ghost. Completed in 2010 it has been released by Sprocket Records, Blake’s independent label. While working on Dream Things True Blake joined forces with Brandon Smith, Scott Cantrell and Rudy Escobedo to form what was to become Rudon Blacott Tension between members and lack of gigs led to the split of the band. Blake began working with keyboardist Bill Lee Harris but with the two having different projects in the works time was hard to come by. Blake joined forces with Zoltan Csörsz Jr., Colin Tench, Troy James Martin and Marco Chiappini for an international collaboration on a major recording project. The project’s storyline is based on the Arthurian legends and written by Blake Carpenter. The Road To Avalon was released on December 24th, 2012 and has acquired quite a following.

During this time Blake also worked with Colin Tench’s other project Corvus Stone providing lyrics and vocals to many songs for their two albums as well as providing voice and lyrics for Coalition’s album Bridge Across Time, Petri Lindström’s Hail To Sabbath and Jack Potter’s Before The Fall.

Blake also created a new side project during this break called Voice of the Enslaved, an enigmatic project whose first release was in the vein more or less like straight AOR with lyrics being anti-establishment, corporation and government.

After the extremely successful release of The Road To Avalon Blake knew he had to come up with something even bigger and bolder for the next release. Before he had even started TRTA Blake began writing a concept story about a boy growing up in a pretty terrible situation. He revisited this concept and knew it was the one that should follow the success of The Road. He did, however, want this to comprise entirely of an actual live band and began the search for local musicians to take part. Troy was already local so the bass was covered. With Troy’s help, TMG recruited Mike Troupe on drums and Doug Floyd on guitars. Blake would play keyboards on this one. Doug Floyd was not able to stay on due to other obligations so the search was on for another guitar player. Not able to find one locally in time to start recording Blake reached out to his friend Jartse Tuominen who agreed to help out, and recording was underway. It was not long, however, before guitarist Steve Centuori answered an ad for the guitar for the live band. He has a heavier edge to his style but, it brought a refreshing and welcoming feeling to the band. With rehearsals underway, recording begun and nearly finished Blake began to realize that having a keyboard player in the band would be of great benefit. Troy suggested Uma DeSilva, a meeting was set, files and sheets were given and, they planned to get together in 2 weeks as a group. When Uma showed up, she played everything she was given to learn with ease (ok, not quite like that but was good enough), and it was obvious she was in. By now, the recording had basically been completed for the next album, but with all these new faces and voices in the band, Blake felt that it would not be right to release it without them on it, so recording was resumed, and the release has been put back. So, with Blake on keyboards, guitar and vocals, Troy on bass and vocals, Mike Troupe on drums and vocals, Steve Centuori on guitars and vocals and Uma deSilva on keyboards, guitars, and vocals. TMG began to rehearse and eventually got a few gigs under their belt but, things were not to be. Troy and Mike had to step down due to multiple obligations and, shortly thereafter, Blake had to make a big move across the country to northern Alabama.

Knowing that there is no timeline for staying in his current location Blake decided to take a couple of years off to clear his mind after the the collapse of TMG and just work and spend time with his family but the itch came back and music started to become a part of it all once again. Blake worked diligently to mix and master what would be TMG’s swan song Jack: A Different Tale and it was finally released in digital form on April 5th 2019.

After many years in the prog-rock scene, Blake revisited a style of music that He grew up with, stuff from the ’80s. He loves synths, drum machines, and airy sounding guitars with melodic vocals and harmonies. The new music he is producing will undoubtedly remind many of those wonderful days of experimental music that was an instant pop success. If you like the music of the 80’s please have a listen you will love what Blake has to offer!