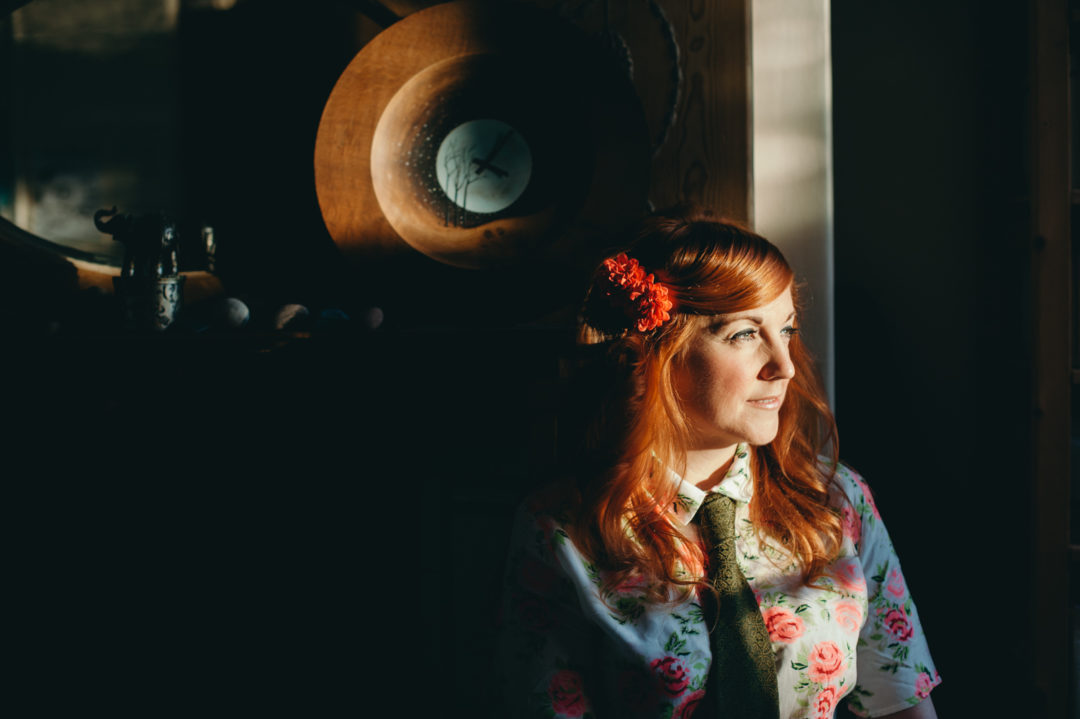 Elfin Bow’s music has been described as a fairy tale experience; pastoral psych-folk, deeply rooted in the life and nature that , charisma and charm.

Her self-titled debut album was released with a live session on BBC Radio Wales and a spectacular sold-out launch in the Epstein Theatre, Liverpool. Elfin Bow has been described by Shindig Magazine as, ‘lyrically astute and melodically inventive,’ and by Fatea Magazine as ‘a rising star of the modern folk world.’

If music is a journey of discovery to be piano.

Elfin grew up in a strict Baptist family and was not allowed to listen to contemporary music. Early influences were 1970’s Sunday school songs and the family folk group, The Beukemas, singing three-part harmonies with her sisters and improvising violin harmonies with the church band. With her classical training on the piano, it was the romantic Arias by Sterndale Bennett and the well-known themes of Mozart, Chopin, and Tchaikovsky that gave her a grounding in subtle emotion and poignant melodies. Her musical horizons widened further as she discovered Tori Amos, Bjork, and PJ Harvey, artists whose rebellious spirit touched a nerve and empowered Elfin Bow to develop her lyrics, individual songwriting style, and artistic direction.

At Art school, she developed a respect for the writings of Allan Kaprow and the ‘happenings’ of the 1960s, where art began to imitate life. Boundaries were blurred between art, music and performance and Elfin began to use multi-disciplinary methods to express her ideas. More recently, it was the writings of Elle Luna, Brene Brown and Tara Mohr that helped Elfin to confidently launch her career as a professional artist and musician.

Since bravely leaping off the musical cliff, Elfin has encountered many serendipitous moments that has only added fuel to her belief that she made the right decision to follow her dreams. She has sung harmonies with folk legend, Bonnie Dobson, (Recently inaugurated into the Canadian Hall of Fame) and supported many artists of note including Robin Williamson (The Incredible String Band) Bronwynne Brent and Chris Wood, and had airplay on BBC 6 Music (Gideon Coe) and BBC Radio Wales (Wynne Evans, Adam Walton.)  She is well supported by BBC Radio Merseyside, BBC Radio Shropshire and many local and internet radio stations including Blues and Roots Radio, Dublin City FM, and Radio Caroline where her self-produced debut album reached number 5 in the Album Countdown Chart.

After a successful crowdfunding campaign, Elfin Bow completed her self-titled and self-produced debut album, which features fiddle by Tom Kitching and banjo by Jamie Francis. Also appearing are Oscar South on bass and digital performance technology, traditional Sakha vocalizations of nature sounds by Saydyko Fedorova, vocal harmonies and flute by her sister Victoria Wasley and Muireann McDermott Long and percussion by Daniel J. Logan. Her collection of twelve original songs were recorded at Hound Dog Studios, Liverpool, by Allan Crookes, mixed and mastered by Gary Lloyd and produced by herself and Gary Edward Jones. Elfin Bow released her album with a live session on BBC Radio Wales and has since has launched her album in both The Epstein Theatre, Liverpool and Theatr Clwyd, Mold; both distinctive events that included storytelling, art installations, public art workshops, dance a and multi-media experience.

With the further backing of her growing fan base, she released a double a-side vinyl single with Fruits de Mer Records, featuring her version of a classic Sandy Denny song, Who Knows Where the Time Goes and her own song, The Wisdom. Both songs have strings composed by Gary Lloyd, recorded with The Scottish Session Orchestra at The New Auditorium in Glasgow’s Royal Concert Hall and mixed by Grammy Award-winner, Khobus Frick.

This autumn, on signing to Peacock Sunrise Records, she will release an EP, Rainbows, and Gallows, before work starts in earnest on her follow-up second album, in the spring.

Elfin Bow has been described as a ‘juggernaut’ of passion, energy, and drive – an essential quality for any modern musician – and whilst her presence may be gentle, she isn’t launching her music on the world with anything other than a loud, and very artistic, roar.