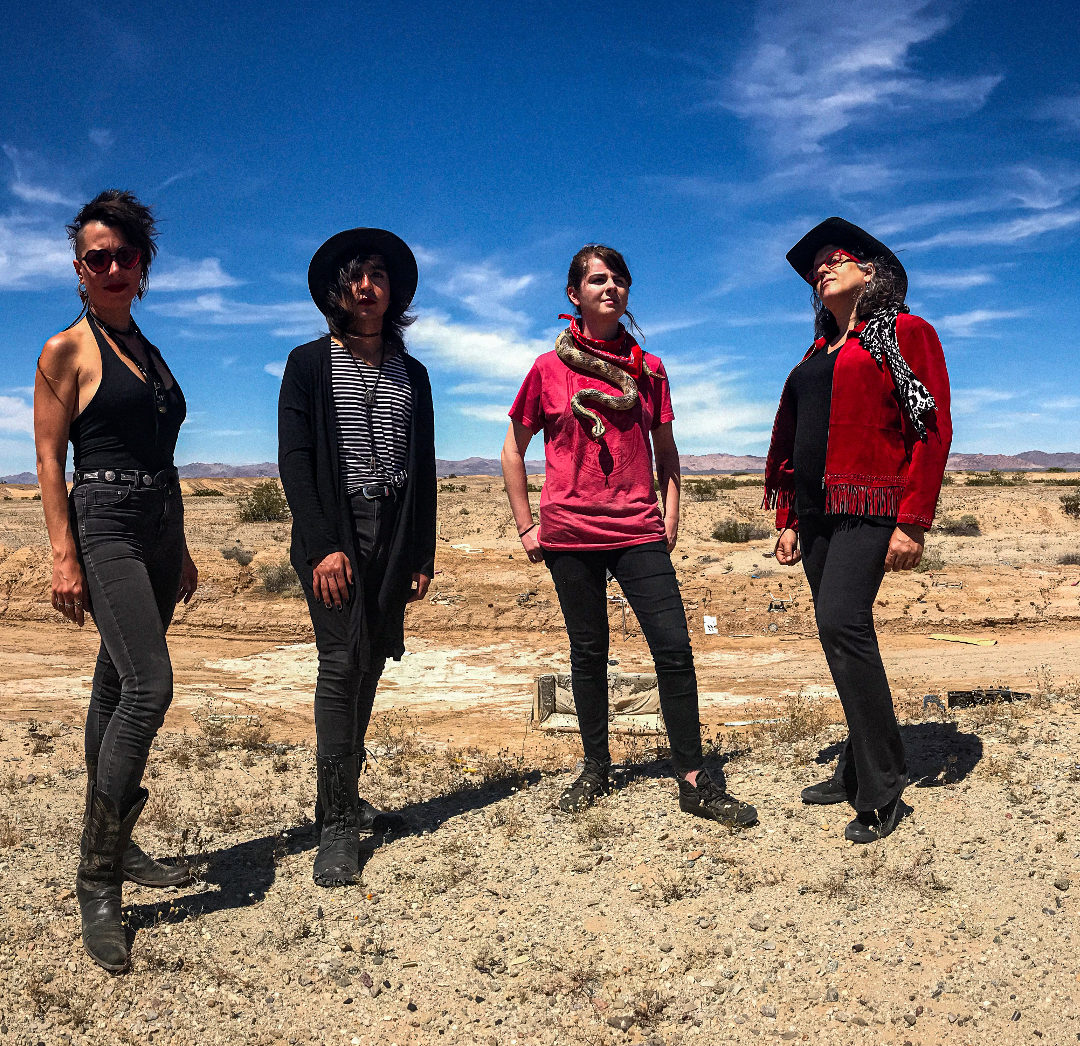 Sheverb has launched a Kickstarter campaign for a newly recorded & mixed 2 tracks of cinematic, surf-infused, peyote-fueled tunes. Now the band is reaching out to their fans for help in pressing their 1st 7″ vinyl.

Sheverb is excited to release two tracks on our very first vinyl. Puttamulettonit is a hard rocking original tune that will throw you back to the days of sock hops and dancing on the beach at the Rendezvous Ballroom. The b-side song, Nowhere Wolf, is our reverb soaked version of an old Frantics tune, Werewolf, originally released in 1960. The songs are recorded, mixed and mastered; now we need your help to press the vinyl. We will be releasing this album on our newly signed label, PeacockSunrise Records.

As a band, we value collaboration, cooperation, respect, and democratic decision-making. Our guiding philosophy for self-producing this vinyl is the same, and we are excited to announce our collaboration with Felice House. For the cover art, we will be using the painting Julia Dean from her Re●Western series:

In this portrait series, Felice House replaced the men of iconic Western films with women. She intentionally inverted the gender roles of the male-dominated genre, empowering those previously portrayed as powerless. House’s work is a visual analog to Sheverb’s music. Armed with our instruments, we are out to challenge the idea of the romanticized Wild West. We represent an alternative to a Manifest Destiny-esque worldview, honoring coexistence over conquest, collaboration over domination. Help us share this message with the world.

We have a lean budget for this ambitious project. Every dollar of this campaign is earmarked for the following production costs:

We’ve already financed the recording, mixing, and mastering. The total price tag for the remaining production costs comes to $1,812. We are throwing in $812 from our band fund and need your help to come up with the remaining $1,000.

These gals are ready for a van! Since the release of our debut album, we’ve traveled over 7,000 miles with our music on two successful tours of the Southwest. We booked, promoted and managed these tours ourselves, and have been committed to connecting with guerilla art scenes and intentional communities along the way. When we bring our show to places like Slab City, Arcosanti, Bombay Beach and Burning Man, we are delivering more than our music; we’re also bringing a message. The late night conversations around sculpture gardens and bonfires explore the concepts woven into our Wild West mythology, such as rugged individualism, Manifest Destiny, and colonization. Light is shed on the modern day implications of this cultural identity, and seeds for positive change are planted. We want to continue traveling with these messages, and the van is the missing key. Every dollar we earn in this campaign past $1,000 goes directly to purchasing Sheverb’s van!

Born on a high desert wind, Sheverb is an all-Ladies, collectively run, psychedelic desert rock band based in Austin, TX. The core of this collective consists of Betty Benedeadly, Xina Ocasio, Fernande Rojas, and Lainey Smith, who bring together the guitar twang of spaghetti westerns, the driving rhythms of krautrock and the confident swagger of blues.

Thank you for your support!

Sheverb released our first album, Chapter One, with your help here on Kickstarter. Since then, we have sold over 300 copies, made our way into regular rotation on several radio stations, and completed two tours of the Southwest. We know what it takes to execute this kind of project, and we are ready to put in the work, but we can’t do it alone. From the bottom of our hearts, thank you for every dollar you contribute towards this project.

If we don’t reach our goal of $1,000, all of the money is returned to our backers. Every dollar counts in this campaign! Learn about accountability on Kickstarter