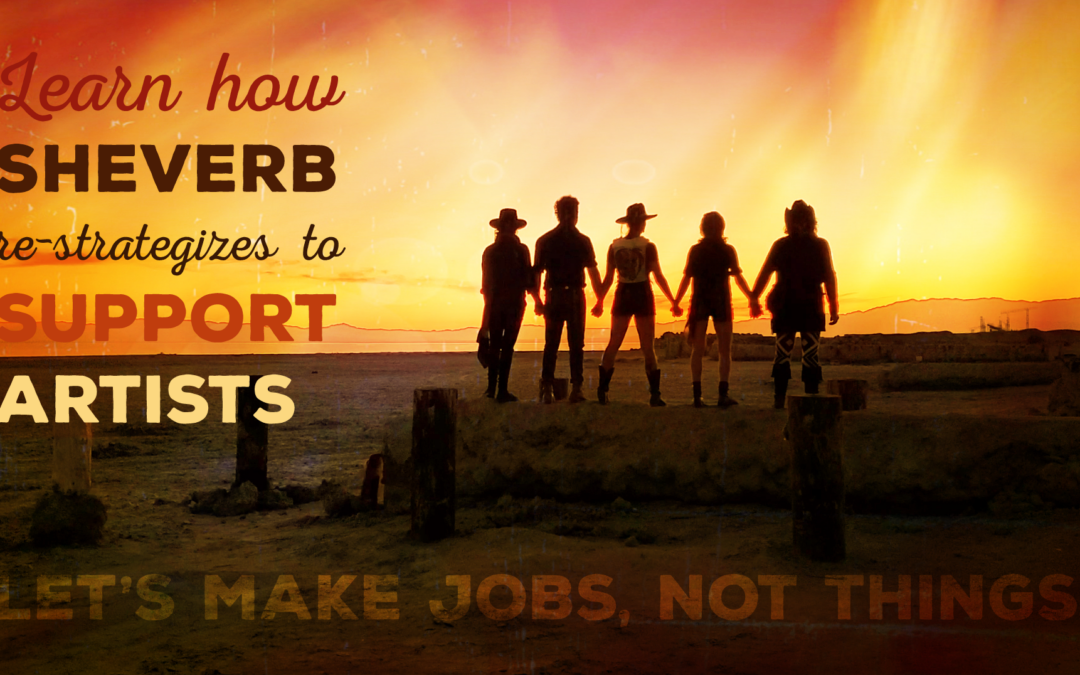 AUSTIN, TX – This past February, Sheverb set out to do something extraordinary. For one month, the tribe dropped out of the daily grind in Austin, TX to live together in a semi-abandoned seaside resort town in the Southern California desert. Once there, they built a pop-up studio, wrote an album, and recorded it. They had just returned home when the COVID-19 shelter-in-place orders began. Now, instead of the initially planned high-production roll out package, the band is going digital and using their revenue-generating potential to make jobs instead of things.

“It feels ridiculous to press vinyl or print a new line of merch when so many of us in the music community are not sure how we’re going to afford rent or food next month,” says Sheverb guitarist Betty Benedeadly. “Instead of producing physical goods, we’d like to hire people to take on digital projects with us, such as creating music videos and perhaps a documentary with the content we captured in Bombay Beach.”

The tracking is complete. The mixing is underway, and the band is fundraising to cover post-production costs. Additionally, they’re hopeful that they can raise additional funds to pay more freelancers to collaborate on digital projects. Every dollar donated will go towards paying working creatives. Sheverb is accepting donations on Venmo at @sheverb and PayPal at Sheverbtheband@gmail.com. While any amount is appreciated, there is a limited time, discounted offer: To be listed as Executive Producer on the Sheverb in Bombay Beach album, donate $500 $250 before midnight May 31, 2020.

Sheverb’s journey to Bombay Beach was a cooperative music-making experiment that blurred the boundaries of life, art, and dreams. For one month, the gang lived communally in a retro trailer, sleeping in bunk beds, cooking group meals, and sharing a single bathroom. They immersed themselves in the local community with late night explorations of abandoned structures and lunchtime picnics on the Salton Sea, a body of water with a complex history. Largely developed in the 1950s, Bombay Beach enjoyed many years of thriving tourism, but water-related environmental issues eventually drove many away. According to the 2010 census, the town’s population had dwindled to 295, but in this past decade, the town has seen an art-driven revival of sorts, with an increasing number of creatives flocking to the area to revel in graffiti-covered buildings and surreal sculptural installations. Sheverb’s goal was to soak in the energy of this unique place and create a sound to match.

The band played music 6-8 hours per day, often publicly and for free, and what resulted is an instrumental concept album that takes the listener through a distinctly Bombay Beach psychedelic adventure. They collectively wrote 9 surf-infused, desert-fueled rock & roll tracks and captured field recordings in town, which are layered into the album. They accumulated found objects (railroad spikes and fish bones, for example), which were transformed into percussion tracks. More than a collection of songs, this holistic album is a time capsule that speaks to the experience of 5 Texan musicians embedded in a bizarre landscape.

To see some behind the scenes footage from this adventure, check out this video on Sheverb’s YouTube channel.

Sheverb is a womxn-led psychedelic desert rock collective based in Austin, TX. While we have a larger network of wild souls contributing to this project, the lineup for the Bombay Beach album is:

Special thanks to the Bombay Beach Arts & Culture Center for hosting us and providing the studio space, and our beloved audio engineer and spirit animal, Buck AE Down, for the professional assistance.